Kurds in Iran ‘overwhelmed with happiness’ after Kurdistan Region vote 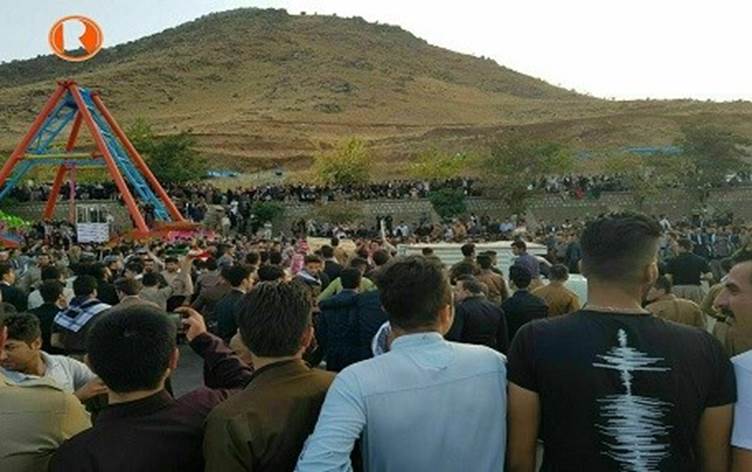 A+ A-
ERBIL, Kurdistan Region — Kurds in Iran jubilantly celebrated as Kurds in Iraq held their historic referendum on independence despite the Iranian government deploying armored vehicles and jets into the Kurdish provinces.

A number of civil activists in eastern Kurdistan organized the ‘Celebration of the Flag’ activity as Kurds in Iraq’s Kurdistan Region finished casting their independence ballots on Monday night.

Celebrations in Mahabad proceeded with the raising of Kurdistan’s flag and the chanting of the motto “Leader, your flag was raised.” People also sang Kurdistan national anthem ‘Ey Reqib.’

Raising the flag of Kurdistan is forbidden in Iran, as is singing the anthem, which was used by the short-lived Kurdish state of Mahabad in the mid-20th century.

“Anti-revolution forces were deployed in the city. Fighter jets were constantly hovering in the skies of Piranshar. The sound of artillery shells in border areas disturbed peoples’ peace of mind,” Mohammed R, a citizen from there said.

Posts on social media showed Iranian forces deployed in most of the cities; however, the presence of border and other forces is often seen as some armed Kurdish political parties are present in the region. Iran regularly responds by shelling their bases.

“Bokan is overwhelmed with happiness. People themselves are holding parties. What you see people expressing their happiness. It is the first time we express our feelings without fear,” Hazhar H, a citizen from Bokan told Rudaw.

One of the biggest parties was held in the city of Sanandaj. Unofficial figures suggest that nearly 20,000 people in Sanandaj took part in the party. The motto “The south is not alone, Sanandaj supports you” was chanted in the city’s Freedom Square. The partygoers celebrated until far into the night.

The historic vote sparked has kindled the Kurdish spirit, whose people are divided across the borders of Turkey, Iran, Iraq, Syria, as well as in diaspora.