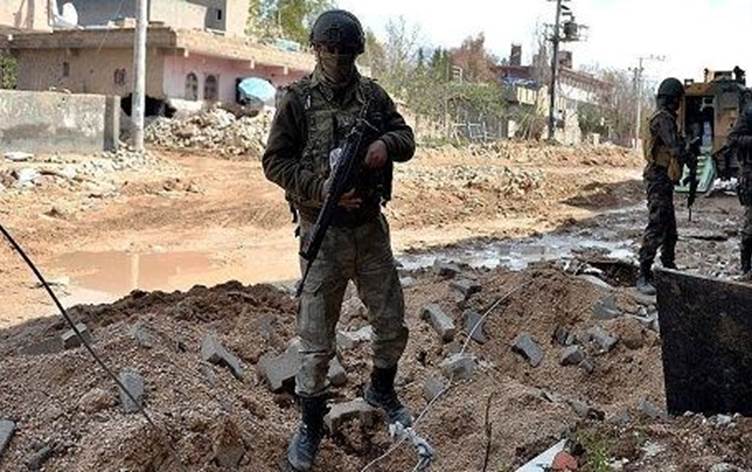 In a photo published on March 16, 2018, Turkish forces conduct an operation at an undisclosed location in the Kurdistan Region. Photo: AA

"Since the 1990s, our villages were under the control of the PKK. But a few days ago when we went to collect fruits of our trees, we saw the Turkish soldiers in the village,” Mohsin Zeri, the chieftain of the village of Zeri in Amedi, told Rudaw.

"Turkey has now erected a base on the Mount Koka which is nearby our village,” said Zeri, explaining the Turkish military is 10 kilometers past the international border and controls 20 villages in Amedi alone.

"Overall 30 percent of territory in Amedi is under Turkish control and nobody dares go there," he said.

Even though many of the villages Turkey has occupied had already been emptied due to the continued armed conflicts between the PKK and Turkish army, the residents used to visit their orchards and groves to collect fruit from their trees and spring herbs.

"It is impossible for us to be able to visit our villages this year to collect the fruits, thus, making our financial situation complicated,” added Zeri.

The head of the Border Guards in the Kurdistan Region confirmed to Rudaw the area Turkey is now controlling had been under the PKK’s dominion.

Boarder Guard Head Dler Zebari added that the Iraqi Border Guards has had no role in the fighting because of the PKK-Ankara clashes.

"Due to instability and the presence of the PKK, our forces did not manage to reach the border line, but we frequently monitor the border areas," Zebari said. "We have not learned of any new advances in recent days, but their airstrikes and mortar shells continue."

Ihsan Chalabi, the mayor of Sidakan, confirmed to Rudaw that Turkish troops "considerably" have advanced on the plains of Barazgr and Barmiza "instilling fears in the hearts of locals."

So far, "eight villages of our town have fallen to the Turkish army."


He added, however, these villages, like those of Amedi, had already been emptied.

However, the mayor warned that Turkey is now advancing to populated villages.

The PKK, named a terror organization in Turkey, has its headquarters in Kurdistan’s Qandil Mountains. The PKK is an armed group fighting for greater political and minority rights in Turkey.

The group vowed to retaliate after four young men were killed during Newroz in a Turkish airstrike in the Choman mountains.

Turkish President Recep Tayyip Erdogan announced on Saturday it would begin an anti-PKK operation in Shingal. Iraq’s Joint Operations Command denied an operation was underway on Sunday. The Iraqi army deployed to Shingal later that day and said PKK had “fully withdrawn.” Only the YBS/YBJ and the Iraqi Army are now present. Shingal officials confirmed an agreement with Baghdad for the PKK to leave.