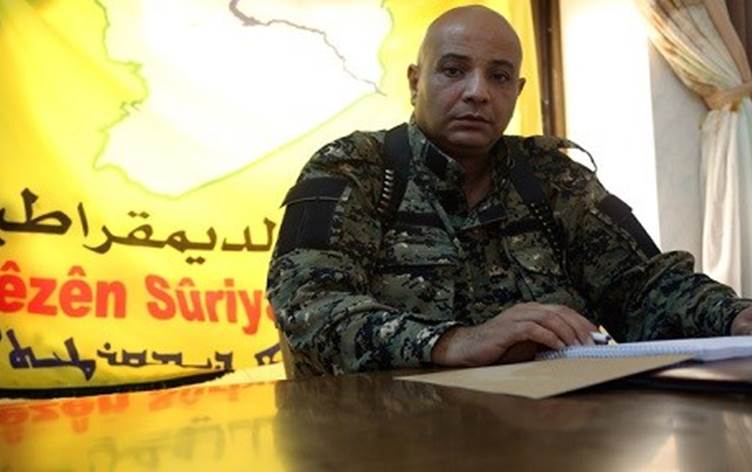 ERBIL, Kurdistan Region - Talal Silo, the spokesperson for the Syrian Democratic Forces, reportedly left his unit and has gone to Turkey.

Mohammad Abdallah, politburo chief of the Hamza Division, told AFP that a deal to take Silo to Turkey was agreed upon between Silo and Turkish forces.

Abou al-Farouq, a deputy chief of Liwa al-Shamal, confirmed the deal to AFP.

Big. Gen. Silo is a Syrian Turkman who has fought in the Turkmen Seljuk Brigade, a faction partnered with the Kurdish-led People's Protection Units (YPG).

Also the spokesperson of the SDF, Silo, went to units of the Free Syrian Army (FSA) near Jarablus, according to the report.

“Silo was secretly coordinating with commanders from the FSA and when he entered areas under their control he then crossed into Turkish territory,” Reuters quoted Ibrahim al-Idlibi, an FSA spokesman, as saying.

The SDF is backed by the US-led international coalition and elements of the group previously have clashed with the FSA, which is now backed by Turkey and elements from Riyadh.

Turkmen, Arabs, Kurds, Syriac-Assyrian Christians and others comprise the SDF.

“We are living here alongside Kurds and Arab,” said Silo in a 2016 SDF statement. Our Syriac and Assyrian brothers are living other areas… We've had good relations and good neighborliness for hundreds of years. We (Turkmens), Kurds and Arabs have good family relations.”

The coalition told Reuters it was “aware of reports of Talal Silo’s apparent departure from the SDF, but have no further details on his current status at this time."

Silo said in 2016 that, as a Turkmen, he would not accept "Turkish custody."

"We will not accept the custody of the Turkish state. It is a misconception if Turkey thinks that they could take Turkmens under their custody," he said in the SDF video statement.

The SDF has fought against ISIS since it was formed in 2015. Its fighters have largely stayed out of the Syrian civil war, with only some elements like the YPG occasionally clashing with the FSA.

"We are the people of the region. We the Turkmens, we are Syrians and not Turks," Silo said in the 2016 statement.