Prime Minister Abdul-Mahdi sworn in with 14 ministers, so far

Iraqi Prime Minister-designate Adil Abdul-Mahdi visited the parliament earlier this month. Parliament will hold a first session on his proposed agenda and cabinet make up on Wednesday. Photo: Abdul-Mahdi/Facebook

Prime Minister Abdul Mahdi sworn in with 14 ministers, so far

Parliament resumed with a vote on cabinet ministers, approving an initial fourteen posts. With more than half the posts filled, Abdul-Mahdi has been constitutionally sworn in as prime minister.

Fuad Hussein was approved as Minister of Finance.

Saleh al-Hassani was approved as Minister of Agriculture.

Bangin Rekani was elected Minister of Housing and Reconstruction.

Ahmed Riyadh was elected Minister of Youth and Sports.

Bassem al-Rubaye was elected Minister of Labour and Social Affairs.

Mohammed Hashim was approved for the Ministry of Trade.

Salih Abdullah Jabouri was elected as Minister of Industry.

Abdul-Mahdi detailed his agenda for the next four years in a 122-page document. It includes ambitious policies to develop the country, resolve strained ties between Erbil and Baghdad, boost the economy, reduce poverty, and restore peace and stability.

His main areas of focus for the coming four years are security, the economy, government services and infrastructure, and administrative reforms.

In terms of security, he said that all arms must be in the hands of the state, rejecting “semi-states” within the country. Armed forces will not be allowed to enter city centres and the police forces will be strengthened, under his plan.

Preventing a re-emergence of terror in Iraq is a priority for his government, as is avoiding external meddling in Iraq’s affairs.

Abdul-Mahdi said his government would support in developing and increasing advanced technology and the resumption of a military industry.

He vowed his government would resolve electricity problems by the summer of 2019, boost the agriculture sector, and build a pipeline network to bring kerosene into homes. 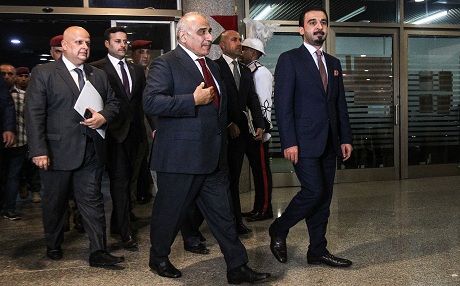 Representatives from Basra – the southern province that was rocked by deadly protests this summer – announced in a press conference during the parliamentary recess that they will not vote for the new cabinet because the province didn’t get its fair share, according to an AFP reporter.

Some of Abdul-Mahdi’s cabinet nominees drew condemnation for reported ties to the former regime and alleged involvement in corrupt activities.

Individual lawmakers from several factions threatened to walk out and some engaged in a shouting match with Speaker Halbousi, before he allowed the break. At least one faction asked for a postponement of the vote to another day to allow thorough study of the nominees.

Just 220 MPs attended the session in the 329-seat legislature. The session is taking place behind closed doors. Iraqi state TV broadcast a delayed stream of the session. 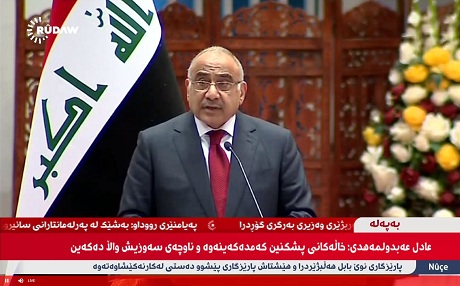 "The political process and democracy is resting on a strong, organized force as we are currently engaged in destroying terror and fighting off external threats,” he told lawmakers, underlining the importance of a peaceful political transition.

He thanked parties for giving him “the full authority to appoint ministers in accordance with the parties’ election shares,” without interference.

He also thanked the Kurdistani parties and other minorities for presenting ministers for his cabinet.

He urged his potential cabinet ministers to concentrate on serving the people, making necessary changes in their individual ministries.

"We would like to make it clear that we will be tough against any illegal things before and after the government formation and stand against those wanting to achieve personal gains or party interests,” he said.

Abdul-Mahdi vowed that transparency and reduced bureaucracy would be priorities for his government.

"The priority of our work goes to the underprivileged people, the youth, young, elderly, the patients, and our nation,” he told lawmakers, saying they work for peace and harmony.

“The authority must be to serve the people, not for violence against them as this authority does not belong to any person, tribe, or certain group."

His proposal for the government includes doing away with the three deputy prime minister positions, streamlining their duties into the ministries.

The parliament took a recess before voting to allow MPs time to discuss the cabinet nominees after controversy arose over some of the names. 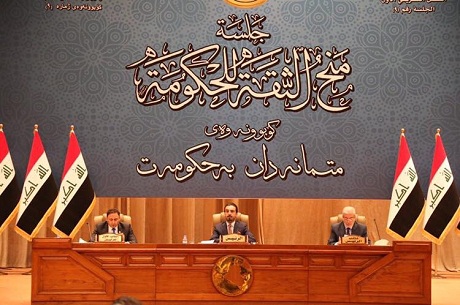 Influential Shiite cleric warned lawmakers they are “on the line today.”

“Today you have a responsibility in front of Allah almighty, the people, and Iraq,” he said in a message released ahead of parliament convening for its first session on Prime Minister-designate Adil Abdul-Mahdi’s proposed cabinet and plan for the government.

Noting that the people have placed their trust in the parliamentarians, Sadr told them, “give your voice to the specialized, honest, independent and competent.”

He also harshly warned them against making selfish decisions or being influenced by external players.

“Don't you dare prioritize your or your party's special interests over Iraq's interests. Avoid sectarian and ethnic allotment. Make your decision Iraqi. Don't you dare surrender Iraq to beyond its borders,” he stated.

“Our new government is an Iraqi government, neither eastern nor western. Its voice reigns, with no other voice reigning over it.”

Out of the 23 ministries in the cabinet, Sadr singled out the security portfolios that must not be subject to external influence.

Prime Minister-designate Adil Abdul-Mahdi is facing an uphill challenge to form a government. He is submitting nominees for his cabinet to the parliament Wednesday evening, but a Sunni bloc has already announced their withdrawal from the process in protest and Kurds are still deciding what course they will take.


The Sunni Qarar Alliance will not join the government and “will work on forming a positive opposition inside the parliament,” tweeted leader Osama al-Nujaifi.

The Iraqi government post-Saddam Hussein has been a delicate balance of power sharing among the country’s groups – Shiites, Sunnis, and Kurds, with quota representation for minorities.

The Qarar alliance, however, said that the spirit of cooperation has been absent from the government formation process.

The alliance pointed to “lack of consultations, lack of a joint vision” with partners, in a statement on Wednesday.

"We say it frankly. The slogan of removing the corrupt remained a slogan with no roots. Even worse, the political blocs that were the subject of corruption allegations have been awarded,” the alliance stated, adding that this adds up to “buying the will of Iraqis.”

Abdul-Mahdi’s 122-page proposed agenda for the next four years was released late on Tuesday, ahead of Wednesday’s parliamentary session.

This document “does not meet the needs and aspirations” of the country, said Qarar.

“The absence of a central vision for issues and acute crises, such as rebuilding ravaged cities, returning IDPs within clear timelines and compensating them, countering the political intentions that still work on preventing the IDPs from returning… and the absence of a clear vision to achieve a successful national reconciliation, all point clearly to the weakness of consultations with the main leaders that have the vision and ideas for resolutions,” the Sunni alliance stated.

Qarar complained that the proposed representation for Sunnis in the government is low and confined to one bloc – that of parliament speaker Mohammed al-Halbousi.

Kurds on the fence

Kurdish parties are generally biding their time before making a decision on which way they will go in Baghdad.

“What is being done in the Iraqi parliament… is playing with the fate of a nation,” Muthana Amin, head of the Kurdistan Islamic Union (KIU) bloc in the parliament, told Rudaw on Wednesday.

He complained that they have not had adequate time to review Abdul-Mahdi’s proposal.

“It takes two days to read it, so how can we vote for this cabinet?” Amin said.

The newly-founded New Generation has decided it will not take part in Abdul-Mahdi’s cabinet. The party secured four seats on May 12 Iraqi parliamentary election.

“New Generation will not vote for cabinet nominees belonging to PUK, KDP, anyone who is accused of corruption, promote[s] racism, sectarianism. Our votes are national responsibility, not for tradeoff,” tweeted one of their MPs, Sarkawt Shams, on Wednesday, expressing skepticism about Abdul-Mahdi’s plan.

The Kurdistan Democratic Party (KDP), the Patriotic Union of Kurdistan (PUK), and Gorran have not yet revealed whether they intend to support Abdul-Mahdi’s plan or not.

The head of Gorran’s bloc, Hoshyar Abdullah, said their decision will be based on how Kurdish issues and the demands of the Iraqi public are addressed in the proposed government’s agenda.

There are 23 ministries in the Iraqi Council of Ministers – typically 12 are reserved for Shiites, six for Sunnis, four for Kurds, and one for Christians.

The mainly Shiite alliances of Sayirun, Hikma, and Fatih are said to be main supporters of the new cabinet.

Abdul-Mahdi must gain parliament’s approval for his cabinet by November 1 or someone else will be handed the task.

After calls for votes on cabinet ministers to be done in secret, Muqtada Sadr, influential leader and head of Sayirun, said on early Wednesday that the vote shall not be in secret and reiterated his previous remarks that no “old faces” or “corrupt” people should be included in the new cabinet.